The Kansas City Chiefs will travel to the StubHub Center in Carson, California to take on the Los Angeles Chargers. This AFC West showdown will kick off at 4:25 PM/ET.

The 2017 season is now in week three, and the Chiefs and Chargers are two teams trending in opposite directions. The AFC West is the most stacked division in the NFL; with three teams standing at 2-0, this early season matchup will impact both teams’ playoff chances. The Chiefs are fighting both the Broncos and the Raiders for the top spot in the AFC West, while the Chargers have suffered back-to-back heartbreaking losses. The Chargers can not afford to lose and fall three games behind (0-2 in division play).

The Good & The Not So Good: The Chiefs 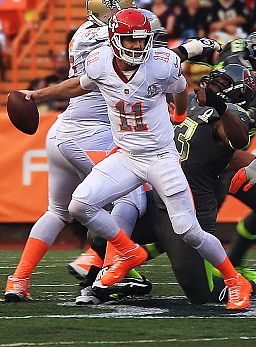 The Chiefs are coming off an impressive win against the Philadelphia Eagles. Kansas City is keeping pace with their divisional foes, and another victory within the division will certainly help them down the line in their quest for the AFC West division crown. After a week one performance that saw the Chiefs commit 15 penalties for 139 yards, Kansas City looks to have gotten their sloppy play under control. Against the Eagles in week two, Kansas City committed five penalties for 40 yards.

The Good: Kareem Hunt continues his ridiculous start to the season. Against the Eagles, Hunt rushed for 81 yards on 13 carries for two touchdowns. Hunt also got involved in the passing game, racking up 28 yards on three receptions. According to NFL Stats, Hunt leads the NFL in rushing with 229 yards, and ranks second with an average of 114.5 yard per game.

The Chiefs starting quarterback, Alex Smith, came back down to earth in week two, but still played effectively. Despite being sacked four times, the signal-caller managed the game well. Against the Eagles, Smith got his tight end, Travis Kelce, involved in the offense with a team high ten targets. In week two, Kelce posted eight receptions for 103 yards and a score.

The Not So Good: After a stellar week one, Tyreek Hill production took a dip. He wasn’t as involved in the offense, and when he was, he didn’t produce the type of production that’s expected of him. Against the Eagles, Smith targeted Hill six times for four receptions and 43 yards. Against the Chargers this week, expect Hill’s involvement in the offense to rebound.

The Good & The Bad: The Unfortunate Case of the Los Angeles Chargers

The Los Angeles Chargers are a decent team in the hardest division in football. Currently, the Chargers sit in last place in the AFC West, behind Denver, Kansas City, and Oakland (these teams are 2-0 on the season). It’s hard to call a week three matchup a must win; however, with the amount of competition in the AFC West, and the prospect of falling two games back, this is as close to a must win game that a team can have.

The Good: The Chargers passing attack is potent. Philip Rivers, when he’s not turning the ball over, is a maestro from the pocket. He completed 31 passes on 39 attempts for 331 yards and one touchdown.

When Rivers is given protection he’s extremely effective. Rivers targeted Keenan Allen ten times on the afternoon; Allen hauled in nine receptions for 100 yards. In 2016, Allen tore his ACL in week one and was lost for the season. If Allen can stay healthy for the entire season, then expect the Chargers passing attack to keep them in games.

BetOnline.ag has the Chiefs favored to win the game by 3 points. The over/under on total points scored is 47.5.  You can read our full BetOnline review here.

The Chargers need this game to stay competitive within their division. If the Chargers fall behind to 0-3 in their division, it won’t get any easier for this team moving forward. This is a must win. Unfortunately for the Chargers, the Chiefs look like the class of the AFC. They’ve already knocked off the Patriots in a shootout and beat a quality Eagles team. Expect a competitive game with some big plays, but in the end it’s the Chiefs that will prevail.