The AFC South race is heating up heading into the final quarter of the season. The Texans are holding their own as the top dog in the division. Despite their offensive struggles, the Texans currently hold the second-longest winning streak in the NFL. Facing a divisional foe, don’t expect Houston to rid themselves of their offensive troubles this week.

Tennessee was riding high after their week 10 victory over the New England Patriots. Then came the Colts in week 11, and that loss knocked them back down to earth. Perhaps the Titans got a little ahead of themselves after beating New England but the loss to the Colts hopefully delivered a wakeup callthey needed. Facing the division-leading Texans, expect the Titans to play with a sense of urgency. A win could help propel them on a wildcard run, while a loss would vastly reduce their playoff chances. 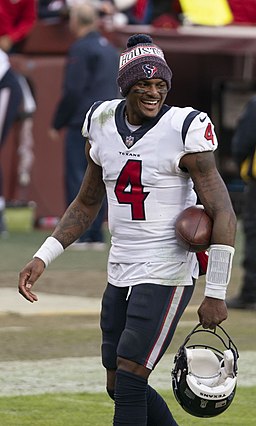 There are a lot of teams in the AFC that come to mind when you think playoff contender. The Chiefs, Patriots, and Steelers all have clout; whether it’s their quarterback or their history, those potential playoff contenders all look like better horses to bet come playoff time.

The NFL’s dark horse contender though: the Texans.

Houston started the season 0-3 and looked like a shell of their former selves. Deshawn Watson looked like a potential MVP candidate last season before a freak injury knocked him out for the year. He’s struggled at times this season to recreate the magic of his rookie year.

On the season, the Houston offense ranks 14th in yards and 17th in points according to NFL Stats. In particular, Houston has struggled to pass the ball effectively.

In 2018, Deshaun Watson throws on average 260 yards per game. He’s thrown 18 touchdowns to 9 interceptions. Despite all this, his numbers are actually up from last season.

The biggest difference in the Texans offense has been protection. Through 7 games last season, Watson was sacked a total of 19 times. Through 10 games this season, Watson’s been sacked 33 times.

The Titans have come back to earth.

When a team beats the Patriots it’s a statement game. The team feels good because they know that beating the Patriots can be used as a measurement of how good they are or can be. The last thing a team wants is to follow that up by getting embarrassed the next week. That’s a good lesson to learn, even if it comes at an inopportune time.

With such a tight race for the AFC wild card, the Titans have a narrow path to the playoffs. That path involves winning the remainder of their games. Head coach, Mike Vrabel, has shown this season that he’s not afraid to gamble and go for the win. While that didn’t work out earlier in the season, don’t expect Vrabel to change his approach or second-guess himself. That’s clearly not his style.

The biggest issue for the Titans is their offense. Despite clicking on all cylinders in their victory over the Patriots two weeks ago, that wasn’t the case against the Colts last week. Against the Colts, the Titans’ quarterbacks were sacked 5 times. Houston ranks 15th in sacks on the season, while the Titans rank 23rd in sacks allowed. Houston might not have an elite pass rush, but against a subpar offensive line expect the Texans to get after the Titans’ quarterback, Marcus Mariota.

BetOnline.ag has the Texans favored to win the game by -3.5 points. The over/under on total points scored is 41.5  You can read our full BetOnline review here.

The Titans have the ability to play better than their stats suggest. They’re a streaky team that shows up some weeks and not others. With that being said, the Texans have a lot to play especially with the Colts nipping at their heals in the AFC South standings. While Tennesse will keep this game close, expect the Houston’s pass rush to get after Mariota and force him into committing turnovers.