The Seattle Seahawks will travel to L.A. Memorial Coliseum in Los Angeles, California to take on the Rams. The Rams and their highflying offense will look to continue their brilliant start to the season when they take on the Seahawks and their fourth ranked pass defense. This NFC West showdown will kick off at 4:05 PM/ET.

The Rams and Seahawks come into week five with first place in the NFC West on the line. The Rams (3-1) are off to a hot start, while the Seahawks (2-2), after a few bumpy games, have found a groove.

The Good & The Great: The Highflying Rams

The Rams offense is flying high to start the season. According to NFL Stats, the Rams have the 5th ranked passing offense and the 15th ranked rushing attack. The Rams’ offense ranks 5th overall with 384 yards of total offense per game. Jared Goff’s and Todd Gurley’s emergence have helped make the Rams legitimate contenders early in the season. 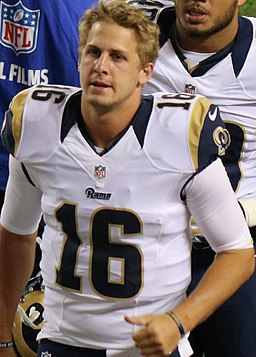 The Good: After being drafted number one overall, Goff appears to have made the season two jump. Last week against Dallas, Goff completed 21 of 36 passes for 255 yards and two touchdowns. Through the four weeks, Goff has thrown seven touchdowns to one interception. Currently, Goff has the second best passer rating among active quarterbacks this season. He’s thrown 20 passes of 20 plus yards, showing that he’s not afraid to throw the ball down field.

The Great: Todd Gurley is having a breakout year. If not for Kareem Hunt’s breakout rookie season, all eyes would be on Gurley as the league’s best back. Last week in their comeback victory over Dallas, Gurley scored the go ahead touchdown, catching a pass from Goff and running for 53 yards. The score put the Rams ahead for good. On the day, Gurley did it all. He rushed for 121 yards on 23 carries, as well as catching seven passes for 94 yards and a score. Goff targeted Gurley a team high of eight times.

The Good & The Troubling: The Seahawks’ Identity

When the Seahawks went to two Super Bowls in three years, their formula for success was to play elite defense and on offense use a power running game, complimented by a balanced passing attack. Since Lynch left the team two years ago, the Seahawks have struggled to form a sound identity. They’re still primarily a defensive oriented team, but now the focus on offense surrounds Russell Wilson. Still, holes in the rushing attack remain and that lack of balance has led to some up and down performances.

The Good: The defense is still king in Seattle. Last week against the Colts, the Seahawks scored four touchdowns on defense, helping to contribute to a 46-point outing by Seattle. Currently, Seattle ranks 14th in total yards allowed per game. While that falls into the middle of the pack, Seattle is clearly still finding its groove after a few bumpy performances to start the season.

The Troubling: According to NFL Stats, through four weeks of the season, Seattle’s rushing attack ranks 11th in the league in term of yards per game. That’s great new for a team that relies heavily on balanced offense.  In each of Seattle’s losses this season, the Seahawks have struggled to consistently run the ball. Last week against the Colts, Seattle lost their starting running back, Chris Carson, to a season ending injury. With Eddie Lacy having a disappointing start to his Seahawks career, look for J.D. McKissic to have a bigger role in the offense in the weeks to come.

BetOnline.ag has the Rams favored to win the game by 1 point. The over/under on total points scored is 47.5.  You can read our full BetOnline review here.

The Rams are the favorite in this game. Los Angeles is playing with a lot of confidence, and their rookie head coach, Sean McVay, has the Rams believing in themselves. Expect a higher scoring game than expected. Russell Wilson is one of the best young quarterbacks in the league, but on Sunday, expect Goff and Todd Gurley to put the league on notice.