The Atlanta Falcons (5-4) will travel to CenturyLink Field in Seattle, Washington to take on the Seahawks (6-3). This Monday Night Football matchup will kick off at 8:30 PM/ET.

The Seahawks are coming off a bounce-back performance against the Cardinals in Arizona. Coming back to Seattle, the Seahawks will look to continue their winning ways against an up and down Atlanta squad.

The Falcons are coming off a bounce-back performance as well. Historically, the team that loses the Super Bowl struggles the following season, and the Falcons are no exception to that rule. Having lost their offensive coordinator Kyle Shanahan in the offseason, the Falcons’ offense has looked like a shell of its former self. Heading into this Monday Night Football matchup, expect the Falcons offense to attack Seattle’s depleted secondary.

Can the Seahawks overcome their injuries in the secondary?

The injuries keep adding up for this Seattle secondary. In week 10 the Seahawks lost Richard Sherman for the season after he ruptured his Achilles tendon, according to ESPN’s Brady Henderson. If that wasn’t bad enough, even more, bad injury news came out of Seattle over the past week. According to ESPN’s Brady Henderson, the Seahawks will be without Kam Chancellor for the rest of the season.

The loss of Sherman and Chancellor to this secondary is tantamount to a complete transformation in the Seattle secondary. The Seahawks have solid depth, but replacing a perennial all-pro I nearly impossible, let alone two.

Seattle is currently leading the wild-card hunt, but the Falcons are right on their heels. A victory in week 11 against the Wild Card leading Seahawks, would greatly increase Atlanta’s odds of making the playoffs.

According to NFL Stats, the Seahawks have the 12th ranked defense in terms of yards allowed. With the secondary in a weakened state due to injuries, it’s up to the defensive line to create pressure and stop this explosive Atlanta offense. The Seahawks have 25 sacks on the season, according to NFL Stats. If Seattle’s weakened secondary is going to survive Atlanta’s powerful offense, then they’ll need to get to Matt Ryan early and often.

What Falcons team will show up in Seattle? 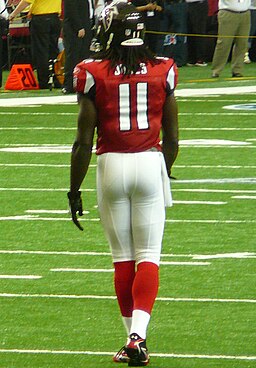 The Falcons are a hard team to figure out. They have tremendous weapons on offense and a fast and athletic defense, but throughout the 2017 season, they’ve struggled to put together a complete effort for four quarters on the field.

Last week, however, the Falcons put together their best win of the season. Facing a Cowboys squad in Dallas, the Falcons dominated the game on both sides of the ball from start to finish.

If the Falcons can put together that type of effort in Seattle, they’ll have a decent shot at pulling off the upset against the Seahawks.

Atlanta has the 8th ranked offense in terms of yards per game, according to NFL Stats. However, despite the yardage, Atlanta has the 16th ranked scoring offense. The Falcons inability to score when they’re in the red one has been their biggest issue all season.

The biggest issue is a lack of big play by Julio Jones for the Falcons’ offense. So far on the season, Jones has one touchdown on the season. He has 8 receptions of 20 plus yards and one reception of 40 plus yards. That’s not bad for a player of lesser talent, but a player of Jones’ caliber needs more involvement in the offense. He’s easily the most dynamic playmaker for the Falcons. He needs to make a bigger impact on the game if the Falcons are going to make a run at the playoffs.

BetOnline.ag has the Seahawks favored to win the game by 1.5 points. The over/under on total points scored is 45.  You can read our full BetOnline review here.

The Falcons are coming to Seattle at exactly the right time. Seattle’s secondary must adjust to life without two of their best players, and that’s going to take time. Russell Wilson cannot will his team to win every week. This game will have a lot of big plays. Expect Julio Jones and the Falcons’ offense to find the end zone this week on their way to an upset in a very hostile environment.