The Seahawks are coming off a surprising loss at home to the Washington Redskins. That loss pushed Seattle into second place behind the Rams for the NFC West divisional crown. Meanwhile, the Carson Palmer-less Cardinals, fresh off their bye week, bounced back with a victory behind a rejuvenated Adrian Peterson. The NFC West race is tightening up, and if either of these teams hopes to make a run at the Rams, they’ll need to start with a win this Thursday.

The Seahawks die and live with their quarterback.

The Seahawks’ don’t have a real running threat outside their quarterback. Russell Wilson now leads the Seahawks in rushing yards with 271 yards on the season. The last quarterback to lead their team in rushing yards for an entire season was Donovan McNabb of the Philadelphia Eagles during the 2000 season. While Wilson is a tremendous athlete, his rushing totals are a reflection of the poor play by both the offensive line and the running backs. 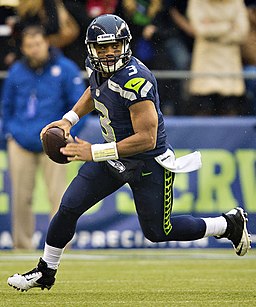 Against the Redskins in week 9, Wilson rushed for 77 yards on 10 carries. He was the team leader in carries as well as total rushing yards. The Seahawks desperately need another runner to step up, and the most likely candidate remains Thomas Rawls. Without consistency from their offensive line and their running backs, however, don’t expect Seattle’s ground attack to break out of their season-long doldrums anytime soon.

The Seahawks need Russell Wilson to play nearly flawless every time out, and against the Redskins he didn’t do that. Wilson threw two costly interceptions, bringing his interception total to six on the season. According to NFL Stats, Seattle’s has the 10th ranked scoring offense in the NFL despite being next to last in rushing scores.

Seattle has scored only two rushing touchdowns all season, according to NFL Stats. Seattle’s one-dimensional offense and over-reliance on Russell Wilson is making their offense predictable in the red zone. With Seattle’s only threat on the ground coming from Wilson’s ability to run and make plays with his feet, it appears as though the Seahawks must live and die by the legs of their franchise quarterback.

Can the Cardinals survive in a Post-Palmer world?

Coming off the bye week, Drew Stanton delivered for the Cardinals by managing the offense. Against the 49ers, Stanton completed fifty percent of his passes for 201 yards, two touchdowns, and an interception. Stanton didn’t light up the scoreboard, but he did his job.

Expectations for Stanton are considerably low. Basically, don’t be the reason the team loses. Against the 49ers in a victory, Stanton accomplished that objective. As the Cardinals move forward, that’s exactly the type of performance the Cardinals coaching staff and front office people hope to get from their backup quarterback.

The real story from the Cardinals week 9 win was Adrian Peterson’s explosiveness. Against the 49ers, Peterson rushed for 159 yards on 37 carries. Peterson turned back the clocks with a vintage performance, showing the rest of the league that the 32-year-old still has something left in the tank.

According to NFL Stats, the Cardinals have one of the worst rushing attacks in the league. With the loss of Carson Palmer, however, expect the Cardinals to continue to rely more and more on Peterson as Arizona pivots away from a vertical offense to a power running style.

BetOnline.ag has the Seahawks favored to win the game by 5.5 points. The over/under on total points scored is 41.5.  You can read our full BetOnline review here.

Despite Seattle’s inept running attack, the Seahawks were only three missed field goals away from victory over the Redskins. Those types of miscues cannot happen at this level, and that’s the razor-thin margin that is the NFL. On Thursday Night Football, expect a close game between two fierce divisional rivals. Seattle needs to win this game to keep pace with the Rams, and that’s exactly what they’ll do.