The Eagles will take on the Giants at MetLife Stadium in East Rutherford, New Jersey. This divisional matchup will kick off at 1:00 PM. ET.

The Eagles are coming off a heartbreaking loss to another division rival, the Dallas Cowboys. Going into their bye week, the Eagles were a perfect 3-0. Since that point, Philadelphia has gone 1-3. The Eagles cannot afford to lose, especially to a division rival.

After Sunday, the Eagles will play their divisional opponents three more times. So far this season, they’ve gone 0-2 in divisional games. The NFL season has quickly reached the half way mark and if Philadelphia wants to make the playoffs under first year head coach, Doug Pederson, they’ll need to regain their early season momentum.

Last week against the Cowboys, one of the biggest criticisms floating around was that Doug Pederson is too much like his predecessor in Kansas City. While former Eagles head coach Andy Reid was a winning coach for many years in Philadelphia, he was often criticized for his play calling and time management. Against the Cowboys, Pederson displayed many of the negative qualities of his predecessor to the extreme displeasure of many Eagles fans.

The Giants are coming off their bye week, which should give them an advantage coming into this matchup. In week seven against the Rams, the Giants’ offense struggled to move the ball. The Rams held the Giants to 36 rushing yards on 20 carries. New York’s passing attack didn’t fair better. Manning threw for 196 yards on 24 completions; He had zero touchdowns and zero interceptions. The Giants rank 6th in passing yards per game according to NFL Stats. But, the Giants offense has a huge chasm between their passing attack and their rushing attack.

New York is 19th in total yards per game, but they’re dead last in rushing the ball according to NFL Stats. Eli Manning is a capable quarterback, and when he’s given time he can win games in this league, but opperating with zero rushing attack is a lot to ask of the aging veteran. The Giants’ need to figure out how to get more out of their ground game. 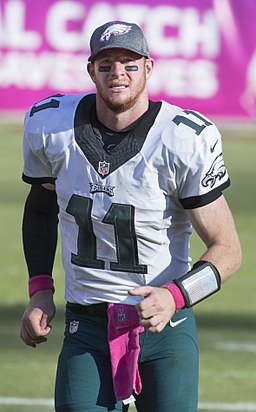 The Giants’ lack of a consistent rushing attack is a major reason for their struggle scoring the ball this season. The Giants rank 28th in the league in total points according to NFL Stats. This season, they’ve compiled eight passing touchdowns to only four rushing touchdowns. It’s not surprising that the Giants record this season has been as unbalanced as their offense.

The Eagles will enter this game with a chip on their shoulder. Last week against the Cowboys, Carson Wentz completed 32 passes for 202 yards and a touchdown in a losing effort. His 4.7 yards per completion is a troubling sign. The Eagles cannot expect their rookie quarterback to take that many throws in a game and still win. It’s partly a design of their system and partly what the defense is giving them, but the Eagles and Wentz need to look down field more. The Eagles are 29th in passing yards according to NFL Stats. But, despite their struggles in the passing game, the Eagles are 10th in points per game. A big part of that is field position and the play of their defensive line.

Both the Giants and the Eagles defenses are allowing very few points per game. The Giants rank 10th in points allowed per game, while the Eagles rank fourth according to NFL Stats.

BetOnline.ag has the Giants favored to win the game by 2.5 points. The over/under on total points scored is 43.  You can read our full BetOnline review here.

This game has all the makings of a low scoring, defensive game. Both the Eagles and Giants are playing well on that side of the ball, but the Eagles have the offensive advantage. The Giants offense has struggled all season to score points and it won’t get any easier against a motivated Eagles squad. Expect a close game, but in the end, the Eagles will pull off the victory.