On Monday night, the Ravens will take on the Patriots at Gillette Stadium in Foxborough, Massachusetts. The Patriots and Ravens rivalry over the years is well documented. Earlier this season, Tom Brady served a four game suspension for his alleged role in the “Deflategate” controversy. The root of that entire saga began in a divisional playoff game and ended with Brady’s aforementioned suspension. This Monday Night Football matchup will kick off at 8:30 PM. ET.

Two years ago, the Patriots won a dramatic playoff game over the Ravens. The Patriots used a few “trick plays” that Ravens’ head coach, John Harbaugh, coined deceptive. There’s a lot of dislike between these two clubs. Over the years, the Patriots have made many enemies, because they’ve beaten just about everyone. But, the specific dislike of the Ravens is notable. 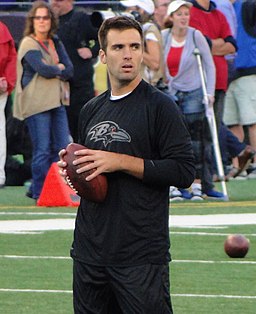 The Ravens, more than most teams, know how to get to Tom Brady. Their defense has generated a lot of pressure on Brady over the years. The results: Brady’s 5-1 when facing the Ravens in the regular season according to Pro-Football-Reference. Despite Brady’s past success, this Ravens squad is something to fear. The Ravens rank 1st in overall defense according to NFL Stats. In comparison, the Patriots rank 9th this season.

The Patriots will have a hard time against the Ravens top ranked defense. Last week against the Rams, the Patriots offense played well, but, they left a lot of opportunities to score points on the field. New England was a heavy favorite in that game, and they played like they were the better team for most of the game. However, the Ravens are a better team than the Rams and the Patriots must make the most of scoring opportunities.

Last week against another AFC East opponent, the Ravens dominated offensively in all facets of the game. Flacco turned in a brilliant performance, passing for four touchdowns on the day. Not only was the passing attack on point, but the ground game finally contributed. Kenneth Dixon and Terrance West combined for 16 carries for 106 yards and a touchdown. If the Ravens play like this on Monday night, the Patriots defense will have a hard time stopping this Ravens’ offense.

The Patriots offense, even without Gronkowski and Amendola, are still a difficult matchup for any defensive unit. The Patriots will need to spread the ball around to multiple receivers. Last week against the Rams, Brady used his vision from the pocket to find Julian Edelman and Malcolm Mitchell all over the field.

Since Edelman’s arrival to the Patriots, he’s been a go to target for Brady and the Patriots offense. Mitchell’s emergence is a bit surprising this season, given that the Patriots have struggled in the past to find receivers in the draft. Last week, Mitchell had the second most targets on team and he made most of them; he caught 8 passes for 82 yards. Look for him to continue to carve out a role in the Patriots offense.

The biggest x-factor in this game is special teams. The Patriots’ punt-returning this season has been abysmal. New England is in a tie for the most turnovers on special teams with six, according to NFL Stats. The Ravens are right behind the Patriots with four, but the lack of execution for New England is alarming. The Patriots removed their primary kick-returner, Cyrus Jones, last week after he muffed a punt. His backup, Danny Amendola, sustained an injury after he came in to relieve Jones. This situation could very well have an impact on the outcome of this game.

BetOnline.ag has the Patriots favored to win the game by 6.5 points. The over/under on total points scored is 44.5.  You can read our full BetOnline review here.

The Raiders’ loss on Thursday night has the Patriots in the driver seat for the AFC’s number one seed. The Ravens have the number one defense for a reason. They are a physical unit that executes their scheme well. The Patriots offense will struggle in this game, but look for a big contribution from Dion Lewis in the passing game to help the Patriots offense move the ball down field. Expect a close game that’s decided by a field goal or less. The Patriots will win this game, but the Ravens are going to cover the spread.