The Denver Broncos will travel east to take on the Cincinnati Bengals at Paul Brown Stadium, in Cincinnati Ohio. The Broncos have ridden their Super Bowl caliber defense to a 2-0 start on the season, while Cincinnati will try to get back on track after last week’s loss. The game will kick off at 1:00 PM. ET.

The Broncos are coming off an impressive two game stretch. Their defense is playing as good, if not better, than last year’s team. In week two against Indianapolis, the Broncos sacked Andrew Luck five times. Those five sacks resulted in a loss of 27 yards. The Broncos generated consistent pressure on Luck all game resulting in 12 hits on the quarterback. The Broncos defensive line will have a harder time getting to Andy Dalton, but they’ll still put up good numbers this week. 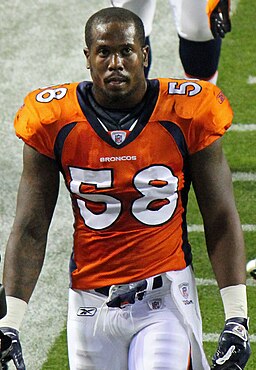 Von Miller is the leader of Denver’s vaunted defense. In week two, Miller alone had three sacks and four quarterback hits. Through the first two weeks, Miller has four sacks. If the Bengals are to hold serve at home this week, then they’ll need to find a way to neutralize Miller’s impact on the game.

The Broncos will likely line Miller up on the right side to face the Bengals offensive tackle, Cedric Ogbuehi. This is Ogbuehi’s first year as a starter and he will certainly need help against Miller or he’s sure to struggle. Dalton will need to get the ball out quickly to protect himself and neutralize Miller’s impact. Since no one can guard Miller on their own, this matchup favors Denver.

The Bengals are coming off a disappointing loss to their division rival. The Steelers dominated the Bengals rushing attack, holding them to 46 yards rushing on 18 carries. The Bengals will need to get back on track, but it only gets harder against the Broncos defensive front.

While the Broncos’ bread and butter is their pass defense, their run defense ranks lower than excepted. A lot of that has to do with their first two opponents. In week one, the Panthers racked up 157 yards rushing on 32 carries and a score. Through two weeks, the Panthers are the NFL’s best rushing team.  In week two, the Broncos gave up 83 yards on 21 carries and a score. The Broncos run defense is a concern going forward. Not this week, though.

Despite the Bengals’ troubles rushing the ball, the Andy Dalton to A.J. Green connection hasn’t missed a beat. In week one, Green received a team high 13 targets. He had a monster performance with 12 receptions for 180 yards and a touchdown. In week two, it was a completely different story. Green’s production took a noise dive. He had eight targets but only two receptions for 38 yards. It’s no surprise then that the Bengals struggled offensively against the Steelers in their week two loss. If the Bengals are to overcome their offensive deficiencies rushing the ball, then A.J. Green must rebound this week with a productive performance. That won’t be easy.

BetOnline.ag has the Bengals favored to win the game by 3.5 points. The over/under on total points scored is 41.5.  You can read our full BetOnline review here.

The Bengals and Dalton have the edge at quarterback over the Broncos’ Trevor Siemian. Cincinnati is a resilient team and this is their home opener. But, this pits strength against strength. To win this game, Dalton will need to throw into the teeth of the Broncos defense. If the Broncos can take away A.J. Green and force Dalton to hold the ball, then the Broncos defense will win them another game. Expect a low scoring game that favors the under. The Broncos have to lose sooner or later, but it won’t be this week. Go with the Broncos to pull off the upset.