The Cowboys are coming off another devasting loss; Dallas’ third loss in the last four contests. Currently, Dallas sits in third place in the NFC East. Last week, Dallas lost at home to the Titans. Throughout the game, the Cowboys looked inept on both sides of the ball. Facing an Eagles defense that looked stronger against the Jaguars in week 9, expect Dallas’ struggles to continue.

The Eagles are coming off a strong performance against the Jaguars. While the Eagles were by no means flawless, they showed strong improvement from Carson Wentz and the rest of the Eagles offense, as he continues to get more and more comfortable in the pocket.

The Cowboys have seen better days

According to NFL Stats, the Cowboys rank 26th in the NFL in terms of offensive scoring. Dallas is averaging 19.2 points per game. The biggest issue with the Cowboys offense stems from their inability to pass the ball. Against the Titans, Dallas starting quarterback, Dak Prescott, played a decent game. He completed 21 of 31 passes for 243 yards and two touchdowns. The offense cannot put too much blame on Prescott for the Cowboys struggles. A lot of the blame can be placed on the offensive line.

Dallas has allowed 28 sacks to go along with 53 quarterback hits. Against the Titans in week 9, Prescott was sacked 5 times for a loss of 18 yards. If Prescott continues to take this level of beating, then the Cowboys passing attack won’t be able to get off the ground. Dallas needs to find a way to create time for Prescott to look and connect with his receivers downfield.

The Cowboys passing attack is even affecting their ground game. Ezekiel Elliot hasn’t been the same this season. Against the Titans, Elliott rushed for 61 yards on 17 touches. Elliott’s struggles this season can be attributed to the struggles of the passing attack. Unless Prescott can start making big plays in the passing game, defenses will continue to load up and stop Elliott and the Dallas rushing attack.

Don’t call it a comeback 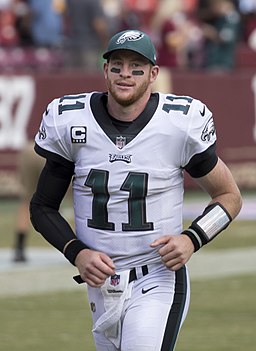 The Eagles are looking like they might have what it takes to win the NFC East. The Redskins stumbled in week 9 against the Falcons; the Cowboys are struggling on offense, and the Giants are already thinking about next season.

The Eagles are right where they need to be.

Philadelphia will have a new offensive weapon with Golden Tate suiting for his first game in green.

While Tate will likely play on a limited basis, the Eagles will certainly benefit from having a player of his skill level lining up alongside Eagles receivers such as Zack Ertz, Nelson Agholor, Jordan Mathews, and Alshon Jeffery.

Tate is a dynamic receiver. His presence will have a ripple effect in the secondary of opposing defenses.

While all the receivers are likely to benefit from Tates presence, Alshon Jeffrey, in particular, should benefit the most. Since Jeffery returned from injury, he’s played well without truly having a breakout performance.

With defenses having to account for Tate in the secondary, expect Jeffery to draw a lot of targets in single coverage against Dallas’ struggling defense.

BetOnline.ag has the Eagles favored to win the game by -7.5 points. The over/under on total points scored is 44.  You can read our full BetOnline review here.