The Giants are coming off a loss to the Redskins in week 9. That loss marks five straight in a season to forget for the G-men. The Giants (1-7) revamped their offensive line in the offseason and passed on multiple quarterbacks in the draft, believing Eli Manning still had a few good years left. Fast forward to week 10, the Giants rank near the bottom half of the league in nearly every offensive category. It’s been a season to forget for New York and it’s only half over.

The 49ers season all but ended when Jimmy G went down in week 3. Things have been bleak for the 49ers since that week 3 loss, losing their next five games. Heading into week 9, the 49ers looked like they had a real shot to beat a struggling Raiders team. San Francisco didn’t just beat Oakland, they took the Raiders to school. Led by the unlikeliest of heroes, the 49ers went on to post 34 points and easily defeated the Raiders for their second victory and first since week 2.

Eli Manning has been terrible, or has he?

The Giants’ franchise quarterback, Eli Manning, is known for being inconsistent. He’s never had an MVP caliber season, despite being a two time Super Bowl MVP. The issue with Manning, however, isn’t a diminishing skill set. According to NFL Stats, Manning has completed 68.3 percent of his passes on the season. If this trend continues it would be Manning’s highest completion percentage for a season in his career.

The biggest issue for the Giants isn’t Manning, it’s their offensive line. According to NFL Stats, Manning has been sacked a league-high 31 times. Additionally, the Giants have allowed 57 quarterback hits. The Giants’ offensive line is a liability, and their play has a ripple effect that’s caused the entire offense to struggle.

Despite the poor play of the offensive line, Giants running back, Saquon Bakley, has managed to put together a strong rookie season. Barkley is averaging 64.9 yards rushing and 62.1 yards receiving per game. He’s so far been the bright spot on an otherwise forgettable season for the Giants. 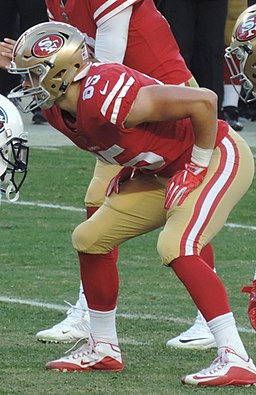 Okay, probably not. But still, Nick Mullens had an amazing debut. Mullens’ completed 16 of 22 passes for 262 yards and three touchdowns.

It’s hard to imagine that Mullens will be able to sustain this level of play for the remainder of the season; however, the Giants’ defense ranks 16th in total passing yards allowed per game setting Mullens up for a successful encore.

The real golden boy on the 49ers is George Kittle. With the tight end position having an all-around down year across the NFL, Kittle has been one of the few bright spots.

According to NFL Stats, Kittle ranks 4th in receptions among tight ends; he leads all tight ends with three receptions of 40 plus yards.

He’s a proven asset for a 49ers’ offense that’s lacked an explosive component. On the other side of the ball, San Fransisco’s pass rush has emerged as a real strength. According to NFL Stats, the 49ers rank 13th in sacks.

Against the Raiders in week 9, the 49ers defense sacked the Raiders’ quarterbacks a combined 8 times for a loss of 39 yards. Facing a weak Giants’ offensive line, expect the 49ers to get after Eli Manning.

BetOnline.ag has the 49ers favored to win the game by -3.5 points. The over/under on total points scored is 44.5.  You can read our full BetOnline review here.

The Giants aren’t as bad as their record (1-7) would indicate. Alright, they’re pretty bad. But that really depends on whether or not the 49ers’ defense can repeat their performance from week 9. The 49ers have the added bonus of playing at home for a second straight week. If the 49ers’ defensive line can get after Manning, as almost every defense has this season, then expect San Francisco to win back to back games or the first time this season.