In week 12, the Jets played the Patriots tough. It was a gutsy performance. It’s been a long season for the Jets, but despite the loss, New York showed some positive signs. So far this season, Ryan Fitzpatrick is a disaster. Before the season, Fitzpatrick held out hoping for a bigger payday. Fitzpatrick had a tremendous year and the Jets offense appeared primed to take the next step. That didn’t happen. Instead, Fitzpatrick’s been a turnover machine. He’s thrown 13 interceptions to only 10 touchdowns, according to NFL Stats.

Last week against the Patriots, Fitzpatrick was the model of consistency. Fitzpatrick completed 22 passes for 269 yards and two touchdowns against a Patriots defense that’s given up the third fewest points per game this season. It was arguably his best performance this season. 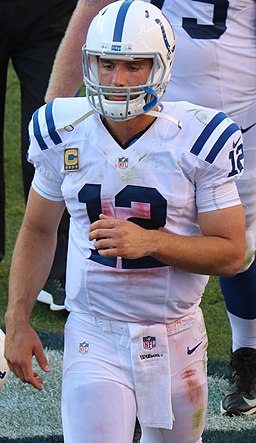 At this point in the season, and because of the division that the Jets are in, their playoff chances are over. But, the Colts still have a shot because their division is so weak. The AFC South is wide open and the Colts still have time to catch division leader Houston. The Texans beat the Colts earlier this year in overtime, but Indianapolis will get another shot at them and this time the Colts will have the home field advantage.

Last week against the Steelers, the Colts got destroyed. Scott Tolzien played in place of the injured Andrew Luck, and the Steelers defense stifled the Colts offense all game. Luck will return this week in time for Indianapolis to make a playoff push. Luck is 8th in the league in terms of yards per game according to NFL Stats. On the season, Luck has thrown 19 touchdowns to 8 interceptions.

The biggest issue facing the Colts offense this season is pass protection. Andrew Luck is the most sacked quarterback in the NFL. As a team, the Colts rank 31st in terms of quarterback hits a head of only Cleveland according to NFL Stats. Fortunately for the Colts, the Jets struggle to pressure opposing quarterbacks. New York ranks 29th in terms of sacks in the league according to NFL Stats. Despite their lack of production on the defensive end, this is the Jets best opportunity to generate pressure on an opposing quarterback. The Colts offensive line is suspect. If the Jets can get to Luck in this game, then they’ll have a chance.

The Jets have one of the best run defenses in the NFL. They’ll need to take away the Colts rushing attack and force Luck to beat them with his arm. He’s fully capable of doing that. But, that’s their best option. On the flip side, the Jets need to establish their rushing attack early. The Colts’ run defense is weak. They rank 23rd in the league and allow on average over 100 yards rushing per game according to NFL Stats.

BetOnline.ag has the Patriots favored to win the game by 2 points. The over/under on total points scored is 49.  You can read our full BetOnline review here.

It’s hard to pick against Andrew Luck. He a great end of game quarterback and the Jets aren’t a superior enough team to put him away early. The Colts offense will rely on Andrew Luck and the Jet’s secondary will struggle to stop the big plays. Expect the Colts to cover the spread.