On Sunday, the Giants will take on the Packers at Lambeau Field in Green Bay, Wisconsin. After starting the season 4-6, the Packers (10-6) ran the table winning six straight games. Meanwhile, the Giants (11-5) have quietly put together a solid season thanks in part to a top ten defense. This Wild-Card matchup will kick off at 4:40 PM. ET.

The Giants have played surprisingly well this season. Last week, the Giants knocked division rival Washington out of the postseason. Washington had everything to play for. Still, the Giants defense, as they have all season, held strong. New York picked off Redskin quarterback, Kirk Cousins twice. The second interception effectively ended the Redskins season.

The Giants defense held Washington’s offense to 284 yards. The Redskins averaged 403 yards of total offense per game this season. The Giants stymied the Redskins offense, holding them to 119 fewer yards than they typically average.

In the opening round of the playoffs, the Giants defense will face Green Bay’s 8th ranked offense. The Packers average 368 yards of total offense per game according to NFL Stats. The Packers offense might rank lower than the Redskins, however, the Packers have a far superior quarterback than Washington. Expect the Giants defense to struggle to take away all of Aaron Rodgers offensive weapons.

Last week against the Lions, Aaron Rodgers and the Packers offense dominated their opponent. With the divisional crown on the line, Aaron Rodgers played his best game of the season. He passed for 300 yards and four touchdowns. The Packers’ Super Bowl aspirations start and end with Rodgers. How far he can take them will determine if the Packers are holding the Lombardi Trophy at the end of the season or not.

Over their six game winning streak, no quarterback has played better than Rodgers has. Rodgers finished the season with 40 touchdown passes and only seven interceptions. Stopping the Packers offense is a tall order for any defense, but the Giants have succeeded in Lambeau where others haven’t.

The Packers may have the edge on offense over the Giants, but New York certainly has the edge defensively. The Giants rank 10th in terms of overall defense. The Packers, on the other hand, rank 22nd in total defense according to NFL Stats.

The Giants rushing attack has struggled all season ranking 29th in the league according to NFL Stats. The Giants offensively rely heavily on their passing attack and that unit hasn’t been consistent for most of the season. New York’s passing attack ranks 17th according to NFL Stats. For a team to win eleven games in the NFL with an offense that ranks 25th in the league, their defense must play outstanding. And they are.

The Giants rank second in fewest points allowed per game. On average, the Giants have allowed about 18 points per game according to NFL Stats. In comparison, the Packers rank 21st allowing over 24 points per game. Overall, this should be a low scoring affair. 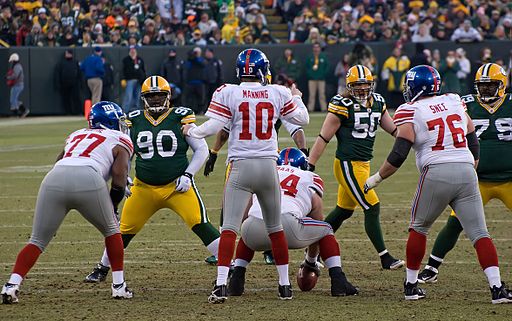 BetOnline.ag has the Packers favored to win the game by 5.5 points. The over/under on total points scored is 45.  You can read our full BetOnline review here.

On paper, the Packers appear to have a lot of advantages. Their offense is really humming right now and the Giants have been extremely inconsistent on offense. All that is troubling for New York, and yet, they’re the only team to beat Dallas this year and they beat them twice. The Giants defense is good and New York has proven in the past that they’re a different team in the playoffs. This game will come down to two things: can Aaron Rodgers overcome a stifling defense that doesn’t give up a lot of points? And, can Eli Manning do just enough to win the game late? Expect a close game decided by three points. Go with the Giants to cover the spread.