The Packers will take on the Cowboys at AT&T Stadium in Arlington, Texas. The Packers are coming off a victory over the Giants in the Wild-Card Round. Aaron Rodgers has the Packers on a seven game winning streak. Green Bay is red hot right now, but the Cowboys have been the hottest team all season. This Divisional Round matchup will kick off on Sunday, January 15th, at 4:40 PM. ET.

The Packers are coming off a solid victory over the Giants. In the first half against New York, the Packers struggled offensively to move the ball. It looked as though the Giants were going to dictate the entire game, but then it happened. Aaron Rodgers connected on a Hail Mary pass to Randall Cobb as time expired in the first half. The Giants kept it close, but then Rodgers and the Packers pulled away big. Rodgers finished the game with 362 yards passing and four touchdowns. 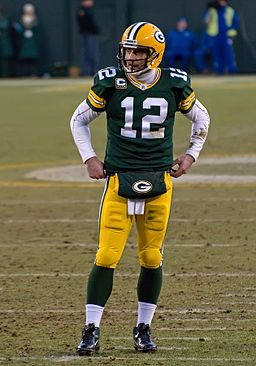 The only thing hotter than how Aaron Rodgers’ finished this season, is how the Cowboys played it all year. Dallas ranks 14th in total defense according to NFL Stats. Overall, the Cowboys struggle to stop opposing passing attacks from picking up yards. The Cowboys passing attack ranks 26th in terms of yards allowed per game. That doesn’t bode well when facing Rodgers’ and a high powered passing attack.

Fortunately for Dallas, they’re a bend but don’t break style of defense. The Cowboys might give up a lot of yards through the air, but opposing quarterbacks are struggling to convert those trips into touchdowns. Dallas ranks 5th in terms of scoring defense according to NFL Stats. In comparison, Green Bay ranks 21st this season.

The Packers’ weakness is their defense. It’s just not a championship caliber defense. The Cowboys have taken advantage of weaker defenses all season with their strong offensive line play.

This was evident in their earlier matchup this season. In that game, Prescott passed for 247 yards, three touchdowns and only a single interception. Ezekiel Elliott rushed for 157 yards on 28 carries. While the Cowboys dominated offensively, the Packers’ early season struggles continued. Rodgers passed for 294 yards and a touchdown, but he also had an interception.

The Packers rushing attack has struggled all season. Green Bay ranks 20th in rushing this season. The Packers’ offense relies entirely on Aaron Rodgers and the passing game. It’s hard to win in the NFL without balance. The Packers rarely play with balance, while Dallas is one of the most well balanced teams in the playoffs.

The biggest x-factor in this game is experience. The Packers and Aaron Rodgers have been on this stage before. And, while the Cowboys have been the hottest team this season, they’re being led by rookies. Prescott and Elliott’s inexperience hasn’t reared it’s ugly head this season yet, but all rookies go through periods of growth.

Dallas is on a roll right now, but NFL playoff games are played with a higher sense of urgency. Prescott and Elliott will need time to adjust in-game to the speed and the intensity. So far this season, the two rookies have outplayed their experience level. While that’s great for Dallas, Aaron Rodgers is a proven veteran and he’ll come out guns blazing. The Packers’ offense is clicking on all cylinders and when Rodgers is connecting with his receivers, he’s difficult to slow down.

BetOnline.ag has the Cowboys favored to win the game by 4.5 points. The over/under on total points scored is 51.5.  You can read our full BetOnline review here.

The Cowboys and the Packers are easily the game of the week. Dallas has a much better defense than Green Bay and that will certainly help Dallas shake off the bye week rust. Green Bay struggled to find an offensive rhythm until the second half of last week’s contest. Dallas is by far the better overall team, and that makes it hard to bet against them. But, Rodgers is having an MVP caliber season and Dallas hasn’t played anyone this hot yet. Expect the Cowboys to keep this game close, but if this game becomes a shootout, then the Packers will get the victory.